Emissions Reductions at the Louisiana Pacific Mill in Golden

Emissions Reductions at the Louisiana Pacific Mill in Golden 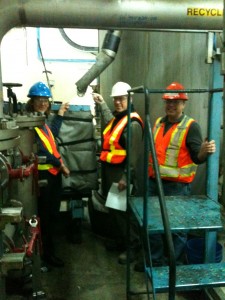 The Louisiana Pacific (LP) mill in Golden has significantly reduced its contribution to air pollution over the past several years. LP now employs state of the art “Best Available Control Technology”.

Many people think that the “cloud” coming from LP is wood smoke. The cloud in fact is mainly steam from three sources. The first source of steam comes from the Wet Electrostatic Precipitator (WESP) stack which is the saturated air stream from the dryers after the volatile organic compounds (VOC’s) have been removed by the WESP. LP utilizes log vats to condition their logs and some steam escapes from them.  Finally, the biggest producer of steam is evaporation from the steam turbine condenser cooling pond. Water is used to cool the turbine and the pond acts like a large radiator to dissipate the heat.

Golden LP is EcoLogo certified for producing renewable energy both for consumption and sale to BC Hydro. To obtain this certification the plant has to adhere to a set of rigorous standards.

Of concern to both mill workers and the community was the “blue haze” that used to be emitted from the veneer dryer stacks.  In late 2004-2006 LP upgraded some of its process machinery; this necessitated the installation of a wet electrostatic precipitator (WESP) to control veneer dryer emissions at a cost of over two million dollars. This emissions control device was mandated by the Ministry of Environment and agreed to by LP as it was clearly the right thing to do to mitigate the plant’s impact on the Golden air shed.

This device is 99.99% percent efficient at removing what was formerly the “blue haze” being emitted from the mill.

The operations at the LP Golden mill are regulated by permits issued by the Ministry of Environment. The air permit sets limits on the nature and amount of emissions allowed by the plant. The plant conducts emission source testing on an annual basis on both the ESP and WESP to ensure compliance with the permit. The results of the source tests typically indicate that LP is well under permitted emissions levels.

The permits also have an allowance for smoke emissions from the ESP and the WESP when the facility is undergoing  a shutdown or start-up to change operations. These emissions are of a short duration as process equipment either cools off or comes up to temperature. The emissions control devices need to reach a certain temperature threshold before they begin to operate efficiently.

The results of these tests and annual reports are available to the public and can be accessed through the BC Ministry of Environment or the National Pollutant Release Inventory (NPRI) http://www.ec.gc.ca/inrp-npri/default.asp?lang=En&n=B85A1846-1.

LP has an integrated Environmental Management System to monitor and control all of its environmental impacts, and is committed to continual improvement. As a result of the pollution control devices, commitment to continuous improvement, and permitting requirements, LP’s positive impact on Golden’s air quality is significant.

If anyone is interested in having a tour of the operation and seeing the pollution control systems in action, or have any other questions they can contact the Plant Environmental Manager at the facility at 344-8800.